Windows 8 has been out now for a couple of weeks. 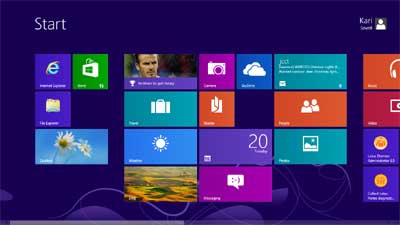 Windows 8 has been out now for a couple of weeks. I’ve taken the plunge in getting a new laptop and giving it a go, and here are my first thoughts to share with you:

Much of the underlying architecture behind it is the same. You can still get to the desktop, and applications launch in the same way as on Windows 7. But there is one big difference…

Where is the Start Menu?

The biggest change is to the Start Menu. It’s been completely replaced with a page of tiles. Initially this was particularly confusing, as clicking on any of the tiles didn’t do anything. After an hour of frustration I had a look around on the internet and found that there appeared to be something wrong with my copy of Windows 8. I tried a few of the recommended fixes, then had to resort to doing a repair install of Windows 8 (less than 24 hours after installing it in the first place). Not a good start, and typical of new Microsoft launches.

The new start menu is a page of tiles. Each tile represents an App (or application). You can make your most popular apps have a larger tile, and rearrange them to suit your preferences (rather like on an Android phone for example). The app tiles then contain content so you can see key information without clicking through. Again this is rather like a Widget on an Android phone.

This all sounds great, but for me there are some fundamental issues:

My Laptop Doesn’t Have a Touchscreen

This would work great on a touchscreen computer. But how many laptops or desktops are touchscreen? Without a touch screen it means a lot of sideways scrolling, which we know to avoid on website designs for example. On a touch-pad which most laptops use as a mouse, this is a pain to move around.

It feels like this has just been added on to Windows 7 as an afterthought, so it can compete in the tablet and smartphone market. On a desktop or normal laptop computer  I don’t feel it works. Perhaps it should have replaced the Desktop screen altogether?

The new Windows 8 side menu

In Windows 7 it’s pretty easy to find one of your applications. Start Menu, Desktop or Taskbar. Worst comes to the worst, you can search straight on the Start Menu and usually find it quickly.

In Windows 8, it might be on the start page somewhere if you can scroll sideways. But you have to leave the desktop to find it there. I’ve had to put virtually every program I use on the task bar now, so I can find them quickly.

The extra menu from the right side of the screen means to change any settings you have to look in two places: The old Control Panel (which is tricky to find) or the new Settings Menu.

To logout you have to go to the Start page and there’s a button top right.

To shut down you have to go to the Start Page, then the right pull out menu, then settings then Power. Do Microsoft not like people shutting down or restarting their computer?

If you have a touchscreen computer, the new start page might be quite good fun. For a normal desktop, this bolt on seems to have made things much more difficult to find.

Search Google for “Windows 8 Start Menu” and you get countless posts from people trying to get their Windows 7 start menu back. There are even applications which will create a Start Menu that looks like the old Windows 7 one.

Perhaps it’s all a step forward, but all seems a bit of a rush job to imitate tablet operating systems which provide a very different function. I’ll reserve judgement for now, but hasn’t really started well for me. Microsoft have a habit of every other operating system being not terribly good (98, ME, Vista). I could well end up reinstalling Windows 7…