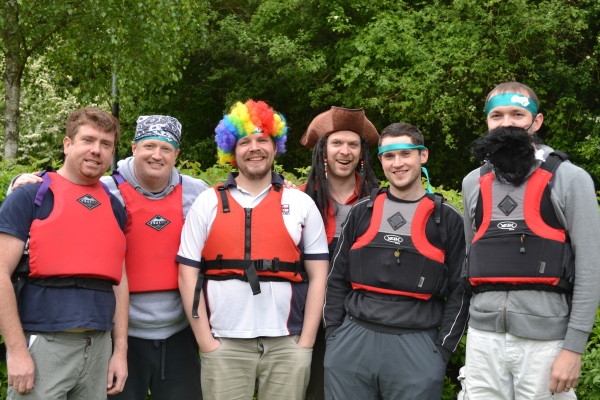 Realnet took to the water with a splash this Saturday in support of the Arthur Rank Hospice. Competing in the second annual Wacky Races event at Milton Country Park, our kayaking web wonders never found themselves out of depth with the opposition.

Arriving for the team briefing, we were faced with a tough pack of local businesses, ready to do battle on the chilly waters of Todd’s Pit. Last year’s winners from the Cambridge News sat confidently in their purple headbands, ready to take on all-comers. The guys and girls from Method Creative (whom we suspect had been training vigorously for weeks beforehand) sat close by, along with a worryingly young and energetic looking crew from the JCI. Cooper Lomaz, Borney UK, and Januarys all looked ready to shiver some timbers, along with our fellow techy sea-dogs Adept. And ready to heave-ho at the back of the room were team Arthur Rank.

After a safety briefing that made a great deal of references to capsizing, we were led to our starting positions for the warm-up round. Despite it actually being quite chilly and overcast, and the waters grey and foreboding, our competitive spirit could not be dampened. Nor could our enthusiasm, as the Jolly Roger was raised and various bits of sea-faring costume were donned. Notably including a rather fabulous rainbow clown wig. Despite being the warm-up, Realnet battled to a credible second place finish.

After a quick breather, the race was now on. The teams lined up and the Star Radio announcer got the qualifier under way. Jonny and Nick weighed anchor and hoisted the mizzen, and soon we had a commanding lead. However, Chris and Dan, whilst very quick going forward, realised that they could not corner quite so quickly, and missed the inflatable animal pick up point. The 180 turn cost valuable seconds, and brought the rest of the pack back into the game. A swift recovery on the final leg however allowed us to again finish a credible second.

After the Arthur Rank boat had decided to finish the race, with some drenchings along the way, the final was suddenly upon us. Realnet lined up alongside the boats of Method and Borneys, amid cheers and jeers from the landlubbers on the shore. Expectancy hung in the air, and then we were off.

Jostling hard, all three boats arrived at the first obstacle neck and neck. Some aggressive manoeuvring was given short shrift by a superb counter from the Method team, that saw the Bourney crew being thrown into the drink. Their bobbing heads caused a momentary blockage in the shipping lane, holding up team Realnet, but allowing Method to pull into what looked to be an insurmountable lead.

After some quick changeovers for the slalom leg, the Realnet and Bourney crews came flying out of the docks, looking to catch the Method team before they disappeared over the horizon. Much bumping of prows around the floating obstacles threatened to turn more rowers to shark bait, but eventually both boats came through unscathed and began to narrow the gap on the cruising Method team.

Realnet had forced themselves into second position, and were chasing down the leaders when disaster struck during the second lap. Approaching the jetty for the crew changeover, Jonny and Nick hit the corner too quickly, and to much hilarity for the rest of the team, found themselves treading water by a scuttled kayak. A second boat was quickly commandeered for the next leg, but the near-drowning had lost us more precious time.

However, our motley crew was not to be undone. The chase was on, and a barnstorming final leg by Kari and Sean the seaclown saw all three teams suddenly jostling for first place once more. A bottleneck at the final duck catching obstacle allowed Method to once again find clear water, and take a well deserved win. Hot in pursuit, the boats of Realnet and Bourney crossed the line neck and neck, to take a superbly contested joint second place.

All hands returned to shore thoroughly ready to splice the mainbrace. Tired arms and soggy sailors all headed in to claim their medals, and crown a glorious day of watery racing, having raised a fantastic sum of money for the Arthur Rank Hospice. If you haven’t donated yet, you still can at the following link – http://www.justgiving.com/wacky-races-2013 – and if you’d like to see more pictures of the day then head over to our facebook page. www.facebook.com/realnetuk. Unfortunately the capsizing happened too quickly for our photographer, but we have great hopes that someone may have captured the moment and will share it…

Many thanks to Method for organising a superb fund raising event, and we’ll be ready to wrest the winner’s mantle from you next year you scurvy scallywags!